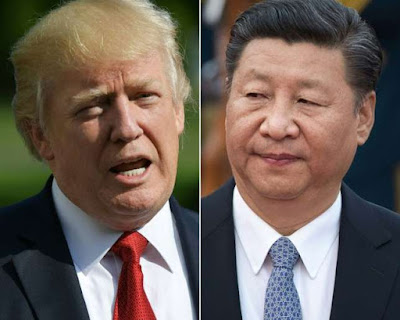 Xi Jinping and Donald Trump have one thing in common -- they both want to make their nations great again. But while China's leader is on the rise, the US president arrives in Beijing laden down with heavy baggage.

Xi will roll out the red carpet for Trump when his five-nation Asia tour takes him to China on Wednesday, bringing the leaders of the world's top-two economies together for the third time this year.
While Trump has made a show of his dominance over other world figures with his notoriously firm handshake, Xi has been determinedly strengthening his grip on power at home.

How Gender Equity Impacts the Bottom …
Short Happiness Quotes From Famous an…
Salir del Ropero: una película lésbic…
The Cage of the “Surreal” – Post 1 of…
Holiday Cards – A Brief History
Chinese vice foreign minister Zheng Zeguang said last week that the visit "will have special significance", vowing to make it "historic".
The two leaders profess to have struck up a friendship since their first meeting at Trump's Mar-a-Lago resort in Florida in April, even as they tussle over trade and how to handle North Korea.
They also share a similar aspirational nationalism: Trump wants to "make American great again" while Xi has sworn to realise the "great rejuvenation of the Chinese nation".
Xi, however, has undergone what even Trump has described as an "extraordinary elevation", saying "some people might call him the king of China".
Trump's visit is the first by a head of state since Xi's name was engraved in the Communist Party's constitution last month -- rendering him China's most powerful leader since Chairman Mao Zedong.

play
Xi Jinping has been acclaimed as China's most powerful leader since Chairman Mao Zedong
(AFP)
The US president, on the other hand, is in an increasingly tenuous position with the lowest approval rating for a president in seven decades, and dogged by a probe into his election campaign's possible collusion with Russia.
"The financial crisis of 2009 and then this teeming disarray of the Trump White House have all added to a Chinese confidence and even arrogance that at last their moment has come," Orville Schell, an expert on US-China relations at the Asia Society, told AFP.
Xi is "ginned up on Chinese wealth and power, and it will disincline him to make compromises."

China has promised to treat Trump to a "state-visit plus" -- an extra dose of pomp and circumstance for the billionaire real estate developer.
Beijing is expected to roll out a military honour guard, formal banquet, and billions of dollars of trade deals.
For Trump, "winning is everything in life. He hasn't had many wins. If he can bring home a win with China... this would be incredibly meaningful to him," Schell said.
But, he added, "Xi could really take him if he's not careful."
The elaborate stagecraft is intended to stop Trump from lashing out at China over a wide range of contentious issues, from their gaping trade deficit to Beijing's ties to North Korea.

play
A wax model of President Donald Trump on display in China
(AFP)
"For Xi it's about his own image and trying to flatter and cajole Trump to play nice with China," said Ely Ratner, a China expert at the Washington-based Council on Foreign Relations.
So far, the strategy appears to be working: the virulent anti-China rhetoric of Trump's campaign has given way to effusive praise for Xi.
"I like him a lot. I call him a friend. He considers me a friend. With that being said, he represents China, I represent the United States," Trump said on Monday in Tokyo.
While Chinese officials say the two men enjoy "a sound personal friendship", the more sober Xi has been comparatively reserved in his compliments.
"Right now, Trump is relatively friendly to China, but at the end of the day he's a businessman," said Hu Xingdou, a Beijing-based expert on Chinese politics.
"If you look at the past, it's possible that he could suddenly show another face."

Still, China is less worried about the visit than in their first meeting on Trump's turf at Mar-a-Lago, University of Hong Kong's Xu said.
"At that time, the Chinese were nervous and worried about the new administration," he said, but there has since been "a reversal of fortune."
"Xi's position is substantially enhanced... Trump's position seems to be weaker day by day."
Even so, the Chinese president needs to be careful not to let his nation's increasing strength go to his head, Hu said.
"Right now, America is in the strategic position of taking 'two steps forward, one step back," said Xu Guoqi, an expert on international affairs at the University of Hong Kong.
But Washington "is still completely leading the world. China is still not on the same order of magnitude."