The Golden Egg (The day time begun and ended) 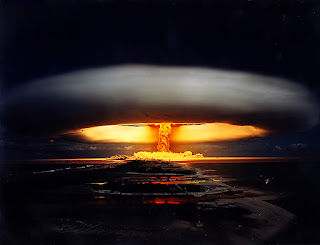 The day that time begun and ended at the same time, at the same place. It just doesn’t matter how or why the atomic age started or who unlocked the door or what war would be fought in the future. What does matter is the reason it didn’t matter and why, because everyone I ever knew would leave this place this very day. When the morning came I felt time begin although why or how it would end I knew not. I found myself smack dab in the middle of the calm before the storm. The birds were singing in bliss, children were playing in the streets while the sky was clear and blue, everything seemed normal as any other day. I felt myself enter a very peculiar silence that was overwhelming as I watched peoples lips moving without sound as if the whole World stopped but didn’t. I then heard the hum of planes overhead and thought to myself this sound must be important but could not fathom why. I looked back on the hustle and bustle of the city as everything seemed to be moving slower than usual like time was out of whack. In this moment I started to remember the good in my life, my Mother holding my hand when I was young, my bike when it was new and all the times I looked back on things I did and felt pride. I felt a vibration in my stomach like the roar of an airplane motor becoming closer and closer. Then I felt an overwhelming sensation that something very bad was about to happen but at the same time knew I was powerless to change it. I started daydreaming of a big Silver Bird that dropped a golden egg splattering all over the city. Then all at once the vibration in my stomach became a sound of a plane in the sky. I looked up to see a silver plane shining in the sun as it dropped a bomb. The minuet it took to fall to the ground became an hour and I saw the future. My great Japan became a circle of blood as the red dot on the Japanese Flag then my great ruler who I thought was a God, Hirohito would bow down before the atom. I saw a cold war and peace for a long time but it was in the shadow of an atomic holocaust.  Then in slow motion I saw the Fat Man strike the Earth where I stood. I heard a click then a clank, clank and then a sound so loud it made silence forever. I looked down upon myself and saw my body mass mix with everything around me as my voice lingered though I ceased to exist. I then became a hot wind that flowed outward in every direction at once as I saw my own fear on everyone’s face that I touched. At the same time I reached for the sky trying to claim back the silver bird that shined in the sun. I became as bright as the sun but only put a gleam on the wings as the plane disappeared to a place under the sun. As if ever there where things that would never be the same again for all who know what happened here although we all shall share this glory forever more.


This post first appeared on Conspiracy Arizona, please read the originial post: here
People also like
How to Exchange ETH to BTC Without Going Crazy Over It
Bed Bug Size
It’s Me – Chapter 9

The Golden Egg (The day time begun and ended)