Sedona Arizona, What is going on there? 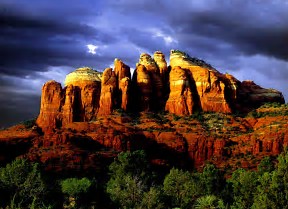 Millions of years ago sandstone and limestone were formed in layers by a receding ocean that was covered by iron oxide that rusted and created the breathtaking landscape of Sedona, Arizona. At approximately 4000BC Native tribes that were hunter gatherers lived in the area, and somewhere between 900 and 1300 AD civilization sprung up creating pueblos and cliff dwellings or Sinagua. At Montezuma`s Castle cliff dwellings are still present where pictographs and petroglyphs can be seen on the walls. A spiritual Tribe of Indians called Yavapai called Sedona the Lady of the Pearl, and according to legend a beautiful woman was sealed in a log by a woodpecker from Montezuma Well to prepare for the great flood. When the great flood was over and the water receded the log came to rest in Sedona where the Woodpecker freed her from the log. She was given a pearl to carry for protection and fell in love with the sun on Mingus Mountain then bore a daughter who was mother to all their people.

Tea Culture in Different Corners of t…
How To Get Rid of Ticks in the Yard –…
Philippine government pressed to put …
The Cage of the “Surreal” – Post 1 of…
Sara y Ava: la pareja lésbica de Lege…
Well tales of Stargates, Vortexes and other worldly things we hear about and ask what`s really going on in Sedona Arizona? Sedona falls under Leyline that travels around the World and forms a magnetic energy field that also flows over some of the wonders of the World like the Pyramids’ in Giza Egypt. A Vortex is similar to a spinning top, velocity changes in circular motion: a force in the direction of motion will cause an object to speed up or to slow down, while a force at right angles to the direction of travel will change the direction of travel. The moon, for example, goes around the Earth at constant speed, but its' direction of travel is changing continuously due to the force of the Earth's gravity. The Vortex, a concentration of energy rising from the earth. Vortexes are believed to be a portal for celestial and terrestrial spirits, you may feel a range of sensations from a slight tingling on exposed skin, to a vibration emanating from the ground when you encounter a vortex. Most often a vortex is felt by a sensation across the back of the neck and the shoulder. Many people believe that Sedona has several powerful vortexes or power spots, making it a highly traveled spiritual and metaphysical destination. A rumor is floating around the scientific community that several top level members are trying to or are using Earth Vertices for time travel. The Sedona area is surrounded by the Rocky Mountains to the east, Grand Canyon to the north, and the Colorado River to the west and an interesting fact is that vortexes are created by water and air. Newton’s law of universal gravitation describes the gravitational attraction between bodies with mass, the earth and moon for example.
Isaac Newton
"I do not know what I may appear to the world, but to myself I seem to have been only like a boy playing on the sea-shore, and diverting myself in now and then finding a smoother pebble or a prettier shell than ordinary, whilst the great ocean of truth lay all undiscovered before me."
Where are the Vortexes?
Red Rock Crossing
Saddle of Cathedral Rock
Bell Rock
Boynton Canyon and Long Canyon Mesa
Oak Creek Canyon Overlook
Chapel of the Holy Cross
West Fork - Energy Well Spring

Sedona Arizona, What is going on there?