Doggy style is the most dangerous s*x position — Study

In a new study called the ‘relationship between s*xual position and severity of penile fracture’ from the International Journal of Impotence Research, doctors analysed which s*x positions were the most dangerous for men. 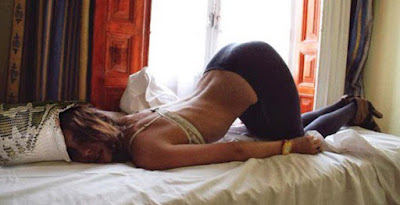 The study found that ‘doggy style’ s*x is the most dangerous, with 41 per cent of cases of Penile Fracture occurring as a result of using the position. Missionary, with the man on top, was in second place, as the cause behind 25 percent of penile fracture cases, followed by s*x with the woman on top in third.
The researchers who worked on the study included R Barros, L Schulze, A A Ornellas, L Koifman and L A Favorito. They noted that doggy style s*x and missionary could cause equally serious penile fracture, while the woman being on top was the least dangerous. They said:
‘We do not observe differences between the severity of the penile fracture between the “doggy style” and “man-on-top”, but the “doggy style” had more severity of penile fracture when compared with “woman-on-top”.’
How does a pen*s fracture occur?
A penile fracture occurs when the appendage is subject to a sharp, blunt force trauma, which can occur during vigorous intercourse or masturbation. Since 1924, 1,600 cases have been recorded worldwide – roughly 16 instances per year, the Telegraph previously reported.
Researchers noted that in 50 per cent of cases, a gruesome cracking sound can be heard. Four in five male victims lost their erection. Those who have already been traumatised from breaking their pen*s are often left with erectile dysfunction problems and a lifetime of painful s*x.
Earlier this year, MailOnline reported on a man from southern China who was left in agony after breaking his pen*s during s*x with his wife. Doctors found that his pen*s was at an odd angle and was in a swollen shape that made it look like an eggplant.
He was diagnosed with a penile fracture after tearing a sponge-like erectile tissue called corpora cavernosa.
Blood flows into corpora cavernosa that runs along the pen*s and making it hard during an erection. The trick to stopping penile injuries is to thrust quite shallowly, according to Tracey Cox.
‘Holding your partner close to you using a grinding rather than thrusting motion will also reduce the risk’, she told MailOnline.

Doggy style is the most dangerous s*x position — Study