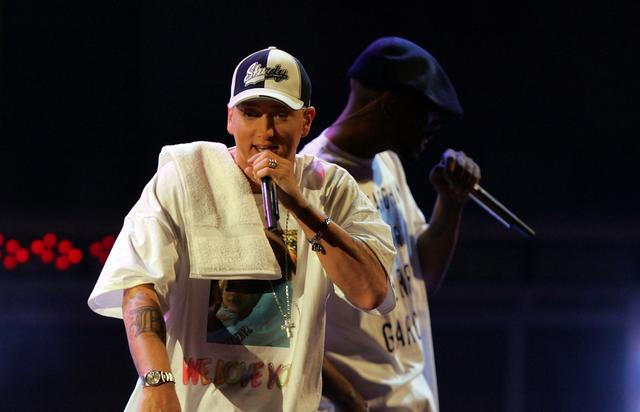 It's Eminem's 45th birthday. Grab your chunderbucket and take a listen to his 10 most vomit-inducing lyrics.

On his major label debut The Slim Shady LP, Eminem tells a story about taking his infant daughter along for a ride to dump her murdered mother's in the lake. "My album isn't for younger kids to hear," he explained in a 1999 Rolling Stone interview. "It has an advisory sticker, and you must be eighteen to get it. That doesn't mean younger kids won't get it, but I'm not responsible for every kid out there. I'm not a role model, and I don't claim to be."
Eminem, who turns 45 today, became the most controversial and commercially successful rapper of all time partly by trafficking in shock value, using his technical mastery to shine a light on the darkest corners of his psyche, and the psyches of his alter-egos. On occasion, he delivered gruesome depictions of rape and murder fantasies. He inspired sexually deviant guest verses from his Detroit collaborators ranging from the ludicrous (Obie Trice's lurid description of an encounter with "Denise from the cleaners" on "Drips") to the extraordinarily fucked up (Bizarre's psychotic rant about incest, matricide, and similarly controversial topics on "Amityville").
Eminem's lyrics are on occasion so powerful and unpleasant that they have the potential to make one not simply cringe but convulse, faint, involuntarily void the bowels, or vomit for several minutes as if in the aftermath of an ipecac-drinking contest. This is the case not only for the Christian mother who took offense to Vince Staples' "Norf Norf," but also for seasoned ran fans with hardy stomachs who are used to listening to tales of savagery in all its forms. Eminem's willingness to do away with any semblance of decorum, combined with his prodigious talents, make him one extraordinarily divisive — even in 2009, when he release Relapse, an album that produced the top three lyrics on this list. Even in 2017, when he says "fuck you" to his fans who support the policies of Donald Trump. With a possible album right around the corner, there is literally no saying what he'll do next.
Anyways... celebrate Eminem's birthday by grabbing your chunderbucket and listening to his 10 most vomit-inducing lyrics.

60 sluts, all of them dying from asphyxia after they sip piss through a Christopher Reeve sippy cup.

Kevin Winter/Getty Images
Somebody dropped me on my head, and I'm for sureThat my mother did it, but the bitch won't admit it was herI slit her stomach open with a scalpelWhen she was six months, and said: I'm ready now, bitch!Ain't you feeling these kicks, cunt?

"If I Get Locked Up"

Kevin Winter/Getty Images
I'll have a fucking man raped with a band-aid over his mouth and shove his head in the fan blade.

Kevin Winter/Getty Images
Like happy things, I'm really calm and peacefulI like birds, bees, I like peopleI like funny things that make me happy and gleefulLike when my teacher sucked my wee-wee in preschool