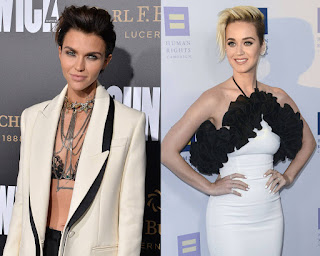 Ruby Rose is singing a different tune.
Days after the Aussie actress lashed out at Katy Perry and her new music, Ruby Rose resurfaced on Twitter to seemingly backtrack on the whole ordeal. In a slew of messages shared Saturday, Ruby Rose shed light on her mission to "stick up for the underdogs" while admitting it's not her usual M.O. to speak out against others.
"Being mean doesn't suit me and leaves me feeling dirty," the Orange Is the New Black star wrote. "Truth is being mean leaves more leaks in your camp than the titanic and I... get so triggered when I think bullies don't get held accountable and it makes me think I should say something.. but it's not [my] place."
She continued, "I have always believed strongly that Karma exists and the truth always surfaces however I'm not god and I can't decide when or how that is."
"Clearly comes from being bullied in school & wanting to stick up for the underdogs," Rose concluded. "However I shouldn't stoop because then the [message] is mixed."

Clasos
The drama first started when Ruby Rose took aim at Perry's "sloppy mess" of newly-released tracks, as well as the pop star's participation in Hillary Clinton's run for president. "I just think with everything going on in the world to go from rebranding as political activist only to ditch it and go low.. is.. a bummer," Rose said in part.
Many immediately began speculating Ruby's rant was largely inspired by her friendship with Taylor Swift , who is reportedly feuding with Katy. And while the "Chained to the Rhythm" songstress has yet to respond to Rose's comments, she did reveal the meaning behind her latest diss track with Nicki Minaj, "Swish Swish."
Looks like Ruby Rose has decided to exclude herself from this narrative all together."I think it's a great anthem for people to use whenever somebody's trying to hold you down or bully you," Perry told Jimmy Fallon on The Tonight Show, without directly mentioning Swift.
"That's kinda what this record is about, it's just like 360-degree liberation," she added, referring to her upcoming fifth studio album Witness. "[First single] "Chained to the Rhythm" was this political liberation, [second single] "Bon Appétit" was a sexual liberation and now, I think this is kind of, 'Swish' represents the liberation from all the negative that doesn't serve you."