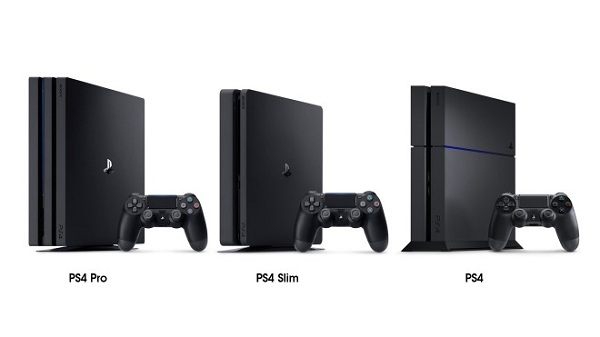 Now there are a lot of accessories Released for Ps4 till now including USB Hubs, Gaming wheels, Ps4 Nacon Revolution Controller, Headsets, PSVR and much more. PSVR also has some amazing titles. The newly released Resident Evil 7 looks perfect in VR. PSVR is originally released for Ps4 Pro but it can also be used in other models with just a little bit of sacrifice. We are now going to compare all three models side by side.

Weights: Their weights are Ps4 (2.8 Kg), Ps4 Slim(2.1 Kg), and Ps4 pro(3.3 Kg). So Ps4 Slim is the lightest and slimmest Ps4 ever released.
5 Cheap Home Security Gadgets You Should Install In Your House
Display: When it comes to Display all Ps4’s support videos from 480p to 4k, also in HDR. Only Ps4 Pro supports gaming at 4k which is limited to a few titles. If you don’t have a 4k tv or don’t plan to buy one the Ps4 pro is useless for you.

DVD: All Ps4’s have support for Blu-ray and DVD support.

Bluetooth: The version of Bluetooth in Orignal Ps4 is V 2.1 while the other two models have Bluetooth V 4.0.

USB: There are two USB 3.0 ports in original Ps4 and Ps4 Slim while the Ps4 pro has three USB ports. You really don’t need extra ports because USB Hubs are available at very cheap prices.

Controllers: Controllers for all Ps4 consoles are same.
How to spot a fake smartphone, avoid buying a counterfeit
WHICH ONE TO BUY:
Well Ps4 pro beats other Ps4 models but keep in mind that it’s priced high. Ps4 Slim is now cheaper and Orignal Ps4 can be bought used for even less. Ps4 pro got 4k support in gaming for a few titles, only buy Ps4 if you have 4k tv or planning to buy one because then there is no point to buy a Ps4 pro. There are very good bundles available for Ps4 Slim at cheap prices. It will be a good decision to buy Ps4 or Ps4 Slim and save money for upcoming consoles. There will not be any effect on the performance of PSVR.