This is the goalkeeper that has faced the five times (Ballon d’Or)winner four times and never conceded a goal from him. 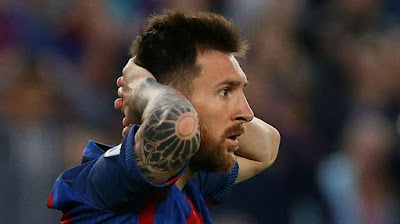 Gianluigi Buffon was one of the goalkeepers who had never conceded a goal from Lionel Messi until this season.

That’s because the five time Ballon d’Or winner scored twice in Barca’s 3-0 win against Juventus two weeks ago in Europe’s most prestigious competition.
However, very few goalkeepers now can say that they didn’t concede against the Argentina international, who is considered as the best of all time.
The Sun are reporting that there’s one goalkeeper that has managed to deny Messi from scoring a goal in four matches.
And that’s Rubin Kazan’s Sergey Viktorovich Ryzhikov, 37, who probably is very proud for his achivement.

Ryzhikov kept a clean sheet against Messi in 2009/10, in Rubin Kazan’s 2-1 victory at Camp Nou in the Champions League group stages.
In the return leg, Kazan held the Catalans to a goalless draw.
Just a season later, Ryzhikov kept two more clean sheets against Messi, in the 1-1 draw and 2-0 victory of Barelona.

This is the goalkeeper that has faced the five times (Ballon d’Or)winner four times and never conceded a goal from him.