Barcelona preserved their unbeaten record in La Liga this season as messi proves he can do it on cold, wet night with brilliant display against Espanyol 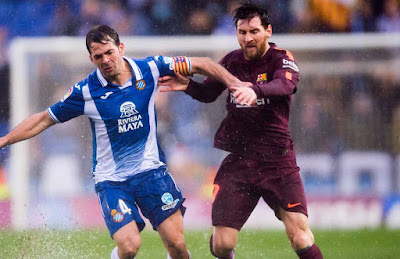 Barcelona preserved their Unbeaten Record in La Liga this season on Sunday afternoon as they came from behind to earn a point against Espanyol.
Gerard Moreno gave the hosts the Lead in the 66th-minute in what was a fiery derby, but the league leaders equalised late on thanks to Gerard Pique’s header.
Ernesto Valverde rung the changes at the RCDE Stadium, with Philippe Coutinho restored to the starting XI and the likes of Sergi Roberto, Jordi Alba, Ivan Rakitic and Lionel Messi rotated the bench.
However, Messi was introduced by the Barca boss just before the hour-mark and produced a lovely cameo despite the awful conditions, including the assist for Pique’s 82nd-minute leveller.

Football fans are convinced the Argentinian forward proved his ability to “do it on a cold, wet, rainy night in Stoke” after his display at Espanyol – especially after seeing the very first thing he did.

With the rain pouring down and the pitch heavily waterlogged, Messi’s first involvement in the game resulted in him evading a couple of crunching challenges from the opposition.

The 30-year-old, who currently leads the race for the Pichichi on 20 goals, managed to combine with Andres Iniesta before accelerating into space and eventually being hacked down.
Below is a video of Messi’s highlights (go to 0:40)
If that wasn’t enough, Messi provided a perfect set-piece delivery from the left-hand side to assist Pique, who enjoyed the goal more than most given how much abuse he’d received from the crowd.
As has so often been the case down the years, Messi was able to rescue a point for Barcelona despite not starting the match, and fans took to Twitter to share their thoughts on him.
People are in agreement that the five-time Ballon d’Or winner’s derby display in treacherous conditions prove that he can indeed do it on a cold, wet night in Stoke – or anywhere else for that matter.

Next up for Barca, who have a huge 19-point lead over defending champions Real Madrid, is a Copa del Rey clash with Valencia before welcoming Getafe to the Nou Camp

Barcelona preserved their unbeaten record in La Liga this season as messi proves he can do it on cold, wet night with brilliant display against Espanyol