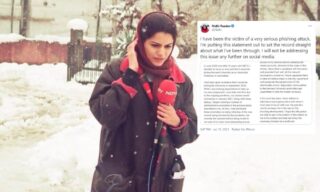 You often hear about phishing attacks and scam stories on various online platforms. Whether it be those horror stories on WhatsApp, or maybe some YouTuber putting out a video telling how they got scammed or something.

But in all those scenarios, you have a stereotyped image of exactly who will fall for these scams. You’d think it would either be those who are not as aware of these things, or maybe not literate enough or coming from the middle-class sector.

Seldom you’d think that a known personality would fall victim to such a thing, but that’s exactly what happened with NDTV’s former journalist Nidhi Razdan.

In a, now viral, tweet Razdan has explained her horrifying story of how she was a victim to a “sophisticated and coordinated phishing attack.”

What Happened With Nidhi Razdan?

Nidhi Razdan is a pretty well-known journalist from the news media company NDTV, having worked there for as many as 21 years.

She was the host of a popular show called Left Right and Centre, and was even a strong voice behind covering the horrifying rape and murder of the minor girl from Kathua and all that happened in its wake. This coverage by NDTV even managed to earn them the IPI India Award for Excellence in Journalism in 2019.

However, on June 13th 2020, Razdan posted a tweet saying that, “After 21 years at NDTV, I am changing direction and moving on. Later this year, I start as an Associate Professor teaching journalism as part of Harvard University’s Faculty of Arts and Sciences.”

In a series of tweets, she talked about her exit from NDTV and even named some of her colleagues that she would miss working along with.

NDTV has taught me everything. It has been my home. I am proud of the work we do, the stories we cover, the values we stand for, especially at a time when the much of the media has surrendered its objectivity 2/n

However, that job offer turned out to be nothing but a scam as Razdan revealed in a tweet posted barely an hour ago.

I have been the victim of a very serious phishing attack. I’m putting this statement out to set the record straight about what I’ve been through. I will not be addressing this issue any further on social media. pic.twitter.com/bttnnlLjuh

In her tweet, Razdan wrote, “I have been the victim of a very serious phishing attack. I’m putting this statement out to set the record straight about what I’ve been through. I will not be addressing this issue any further on social media.”

Her exact story given in the notes screenshot posted is

“In June 2020 and after 21 years with NDTV, I decided to move on and said that I would be joining Harvard University as an Associate Professor of Journalism.

I had been given to believe that I would be joining the University in September 2020. While I was making preparations to take up my new assignment in January 2021. Along with these delays, I began noticing a number of administrative anomalies in the process being described to me.

At first, I had dismissed these anomalies as being reflective of the new normal being dictated by the pandemic, but recently the representations being made to me were of an even more disquieting nature. As a result, I reached out to senior authorities at Harvard University for clarity. Upon their request, I shared some of the correspondence that I believed I had received from the University.

After hearing from the University, I have now learnt that I have been the victim of a sophisticated and coordinated phishing attack.

I did not, in fact, receive an offer by Harvard University to join their faculty as an Associate Professor of Journalism. The perpetrators of this attack used clever forgeries and misrepresentations to obtain access to my personal data and communications and may have also gained access to my devices and my email/social media accounts.

Alarmed at the scale of this attack, I have filed a complaint with the police and provided them with all the relevant documentary evidence.

I have requested them to take immediate steps to identify, apprehend and prosecute the perpetrators of this abominable attack. Separately, I have written to the Harvard University authorities and urged them to take the matter seriously.

In the past few days, I have written to individuals and organizations with whom I have been in touch with over the past few months to keep them informed of this shocking development,” it read. “I hope that the police are able to get to the bottom of this attack on me at the earliest and help me bring this unsavoury incident to a swift end.”

I’m not gonna lie when I first heard that Nidhi Razdan was joining Harvard as an associate prof, I was like “how?” Because you don’t just get appointed as an associate prof without a PhD. But I didn’t say anything because I thought maybe it’s one of those fellowship appts.

Nidhi Razdan after reaching out to senior authorities at Harvard university for clarity. pic.twitter.com/BRUJYcwfoV

The Harvard fiasco is possibly the worst thing to have happened to Nidhi Razdan in her entire life.
It puts her credibility in serious doubt.

I am not being able to comprehend this!
Nidhi Razdan, a journalist, says that she left her job with NDTV after 21 years without properly checking with Harvard University and many months later, realised that it was a phishing attack.
Harvard never really offered her a job.
Really? https://t.co/HURbxfy1C8

– No Interviews
– No Phone Calls
– No Proofs
– No Cross-Checks

So as per Nidhi Razdan a fake person offered her a job at Harvard University.. she accepted the offer, quit her job at NDTV, moved to abroad without even checking the authenticity. What a joke. She is a journo & she didn't even verify something like that.. kisko bevkoof bana rahe

Although making fun of Razdan in this situation is not totally correct, because this can happen to anyone, one thing this does is increase the need for more awareness on what is phishing, phishing attacks and how to stay safe from them especially in the increasingly digital age we are living in.

India 3rd Most Targeted Country For Phishing Or Online Frauds; Here’s What You Can Do To Avoid Falling Prey To It