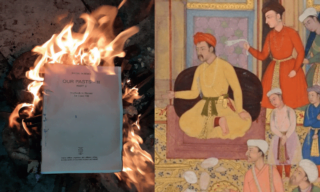 The controversy around Mughals and their image in India has, time and again, incited many legal and illegal episodes. The recent one is a direct RTI asking for some clarification on alleged misinformation in Ncert textbooks.

Why Lawyers Use Legal Pads?
It’s Me – Chapter 12
Top 10 Sites to watch Telugu Movies O…
Spider-Man: If This Be My Destiny - L…
How to Get a Girl to Have Sex With Yo…

Who Is The Petition About?

In an RTI (Right To Information) application filed on 3rd of September 2020, the applicant, Shivank Verma sought two clarifications from NCERT, as reported by OpIndia. Both the doubts are in the context of a paragraph mentioned on page 234 in the book ‘Themes of Indian History (Part II)’ for class XII. 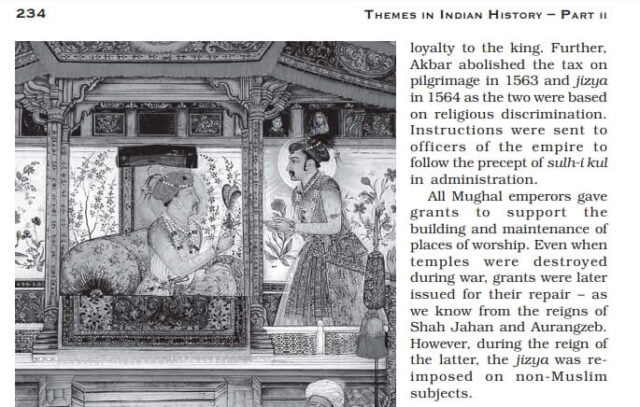 The paragraph suggests that the Mughal emperors bestowed grants to all places of worship, including temples even for maintenance and repair. The complainant asked for illumination of the sources used by the authors to arrive at such a conclusion.

Secondly, he also inquired about the details of the temples repaired by Aurangzeb and Shahjahan during their respective reigns.

What Did NCERT reply?

Just like the fate of all other RTIs, this also did not bear any results. NCERT, in its casual reply, informed that the information in question is not available with them on the 18th of November, 2020. 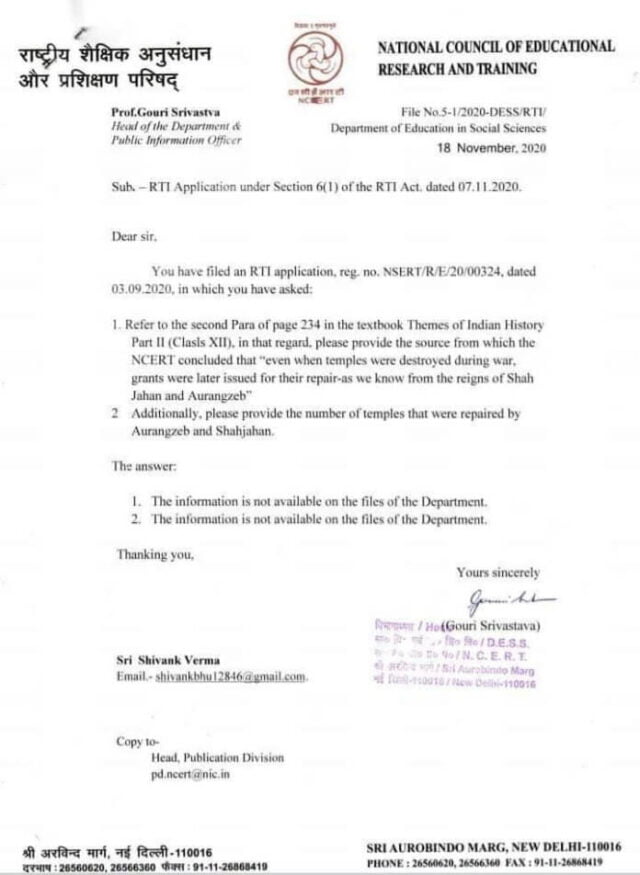 All these particulars are based on an image of the RTI letter that has been doing the rounds on social media. Therefore, the authenticity of this event is not proved yet.

Also Read: Back In Time: A Constant In Our NCERT School Books, Hindi Writer Munshi Premchand Passed Away 83 Years Ago Today

What Is It With The Ruckus Now?

With the New Education Framework (NEF) coming in, the parliament has taken up the responsibility to reform the school textbooks. The parliamentary standing committee has claimed to balance the weightage given to various topics and remove references to any distorted facts.

Coincidentally the letter also went viral around the same time as the news of the committee, and its proposals did.

How Did The Netizens React To It?

The reaction was pretty much that of anger and disappointment with the most advanced educational institute in India. Within a few hours, it started trending on Twitter. One of the significant accusations put forth by the Twitterati was that Mughal history is given too much emphasis.

Not sure why everyone is shocked that entire #NCERT books is filled with Fake History, Abrahamic Propaganda and Anti Hindu Hate contents.

Don’t you know the minute Antonio came to power she got inputs Communists, Padres & Mullahs to change the books?

While BJP did nothing pic.twitter.com/EOIfk7Bb4X

All NCERT History text books were got written by JNU History department by the UPA 1 – complete Leftist propaganda. Bonfire of these books is long overdue. https://t.co/H7gSXJhPEy

is National Council of Educational Research and Training (NCERT) which prepares textbooks, admitting about spreading falsehood as history through textbooks which are prepared by fakeries of your ilk. https://t.co/6N41dqfJ8n pic.twitter.com/MKTNzEZKuZ

They also slammed NCERT as a leftist organization created to train the kids to love their oppressors. Netizens blamed them for perpetuating lies generations after generations.

The information is "not available" in the @ncert files because it doesn't exist? The real question is why did the authors insert such dubious claims in our history books in the first place & who "instructed" them to do so? https://t.co/doJxJPrq5P

Ncert said RTI,it has no information on sources of it's book claimed that mughals gave grant to repair the temples destroyed during war.without information why @ncert publish this in its book.Students are being teach such nonsense.#NCERT @DrRPNishank pic.twitter.com/yG9AXaaC6N

It also encouraged others to come up and seek justification for similar disputed facts mentioned in the book.

NCERT the most trustable source of Information
But In History books there is a mention of #AryanInvasionTheory without any proof.
Please check #Rakhigiri findings
We Indians are forefather of complete world
But IDK why #ncert is doing such silly things from past
We have to change pic.twitter.com/EuKR1C80zP

The annoyance reached such heights that pictures of people burning the textbooks also went viral on the Internet.

It is clearly a social media mob mentality. It is definitely a matter of concern if wrong information is being passed on to us through textbooks. But unless confirmed, we should avoid any such behavior that can abate the faith of our school-going kids in the education system of the country.