So Shocking, Man Gets Arrested For Having S2x With His 15-year-old Girlfriend 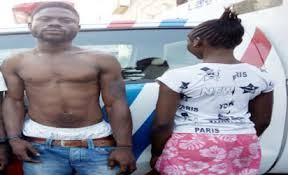 A 21-year-old Zimbabwean from Bulawayo, has been ordered to perform 420 hours of community service for having s1x with a 15-year-old girl he claims is his girlfriend.

According to The Chronicle, the man was arrested for having an affair with an underaged girl.
The man’s love affair with the girl was exposed to her family after the teen’s mother found her daughter in possession of a cell phone belonging to him.
Innocent Kaunda of Cowdray Park suburb was convicted of having s*xual intercourse with a minor on his own plea of guilt.
He told the court that he was not aware that the girl was under age.
“Your Worship, my girlfriend told me that she was repeating her O-level. I concluded that she was at least 17 years or older. Even judging from her body one cannot tell that she is under age,” said Kaunda.
Western Commonage magistrate Mr Lungile Ncube sentenced Kaunda to 12 months in jail which was wholly suspended on condition that he performs 420 hours of community service.
“This court had taken into consideration that you are still young and you admitted your offence. It considered that you only committed the offence after the minor had presented herself at your place of residence. You will perform your community service at Luveve Police Station and should complete within 16 weeks,” said Mr Ncube.
Prosecuting, Ms Magret Takawira said on March 6 this year, the minor did not go to school and spent the day with Kaunda.

“Complainant went to accused’s place of residence. She changed from her school uniform into casual wear. Accused and complainant proceeded to the city centre. Around 1AM they returned to Cowdray Park. Accused led complainant to his bedroom and they had consensual s*xual intercourse,” said Ms Takawira.

She said the minor’s mother found a cell phone in her bedroom and she confessed that it belonged to Kaunda.
“Complainant narrated to her mother the relationship between her and accused. A police report was made and Complainant was referred to a hospital.
“A medical affidavit can be produced in court as an exhibit,” said Ms Takawira.
The post Serious Drama as Man is Arrested For Having S2x With His 15-year-old Girlfriend appeared first onTimeofgist.com.

How To Find Your Purpose And Passion …
Obscure Crypto Exchange Reports that …
Olomana Trail Hike {Three Peaks Oahu …
Where did the hummingbirds go?
Aspen Ruggerfest and Sun Sets in Snow…

So Shocking, Man Gets Arrested For Having S2x With His 15-year-old Girlfriend