Chess is a game that dates back to 1500 years. Starting in India, it found its way through Persia and Muslim territories all the way to Russia and Spain. While the game traveled through different cultures, the pieces changed too. This happened over several centuries until it reached its most modern version as we know it today.

The game has always signified strategy, and thinking ahead and represent a sophistication. It symbolizes honesty, transparency, and constant learning. Each player must think every move through as well as the consequences of that move. During each game, the player learns from their mistakes and makes them stronger for the next game. When one loses in chess, it is usually taken with grace and dignity.

Chess’s ongoing popularity gives great reason as to why people would want to Tattoo it on their bodies. It is easy to learn with kids starting as early as the age of five years old. The moves are quite elementary which makes it easy to remember and from a young age, kids practice the different ways of taking down the opponent.

You need to have a strong mind to play chess. You need to put your opponent on the defense and constantly be on the attack. You can’t bluff in chess-like you would be able to in a game like Poker. Everything is on the table. Both players can see what is possible without there being any hidden cards or agendas. You also can’t win chess because you are lucky. There is always a thought process in the background that is a reflection of your ingenuity.

There are a few reasons why people would get a game of chess tattooed in their bodies. The King is the boss. He represents authority. Usually, the king is one of the last men standing. He is also the piece that needs to be defended which can translate to a person, who although he is a leader to many, must take care of himself.

The Queen is one of the most powerful pieces who can move in most directions. Losing a queen can have drastic consequences so even though she is the most valued piece in the game, it is important to make sure you take great care of her. Getting a Queen Tattoo can symbolize the respect one has for women and the power they have or should be recognized of having,  in this world. A man can get a queen tattoo to represent his significant other and woman might get a queen tattoo as an ode to her and other women in the world.

The Knight piece is a bit more unusual. A person would get a knight tattoo to represent the unusual path that they take in life. They are high ranking and agile. They can jump a few squares which can represent speed and agility in life. A knight tattoo can be a great way to combine your love for chess and horses too. 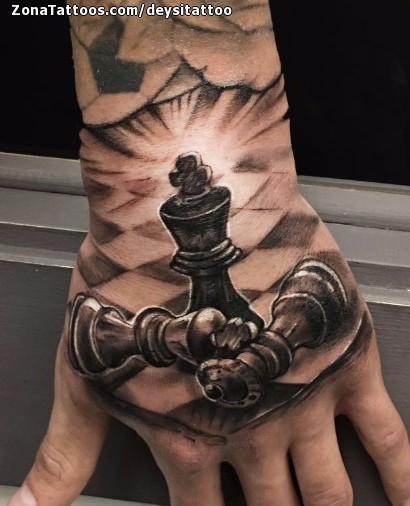 The Bishop usually has connections with the Christian religion and faith. One might get a tattoo of a bishop as a symbol of belief. Another reason to get a bishop tattooed might be that they are next in line for something big in their lives. The bishop is usually placed beside the King and Queen and is the next important piece after them.  The bishop piece can move diagonally for as far as it can. It knows its path and will continue to go that path until it reaches its goal. Anyone who has the same goals in their lives would get a bishop tattoo.

The rook is mostly represented as a castle, the fort of the team. It is strong and sturdy. Anyone interested in getting a rook tattoo may be a person who sees themselves as a person who watches over others or observing the world. It has also been said that the rook represents the wise man’s stick.

The pawn pieces are seen as soldiers who get used and sacrificed. They are just as important as any other piece on the table and usually not highly regarded. Choosing a pawn piece as your tattoo can demonstrate your recognition of the position.

Getting a tattoo related to chess can have other representation such as:

The post Chess Tattoo and Meaning appeared first on TattoosWin.