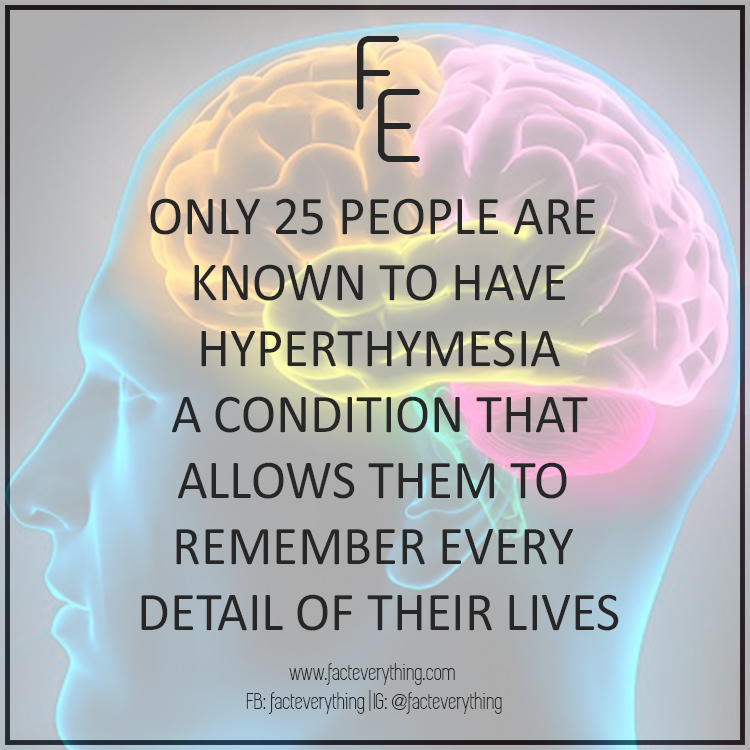 Hyperthymesia is the condition of possessing an extremely detailed Autobiographical Memory. People with Hyperthymesia remember an abnormally vast number of their life experiences.

Individuals with hyperthymesia can recall almost every day of their lives in near perfect detail, as well as public events that hold some personal significance to them. Those affected describe their memories as uncontrollable associations; when they encounter a date, they "see" a vivid depiction of that day in their heads.Recollection occurs without hesitation or conscious effort.

It is important to draw a distinction between those with hyperthymesia and those with other forms of exceptional memory, who generally use mnemonic or similar rehearsal strategies to memorize long strings of subjective information. Memories recalled by hyperthymestic individuals tend to be personal, autobiographical accounts of both significant and mundane events in their lives. This extensive and highly unusual memory does not derive from the use of mnemonic strategies; it is encoded involuntarily and retrieved automatically. Despite being able to remember the day of the week on which a particular date fell, hyperthymestics are not calendrical calculators like some people with autism or savant syndrome. Rather, hyperthymestic recall tends to be constrained to a person's lifetime and is believed to be a subconscious process.

Although hyperthymestics are not necessarily autistic, and likewise savants do not necessarily memorize autobiographical information, certain similarities exist between the two conditions. Like autistic savants, some individuals with hyperthymesia may also have an unusual and obsessive interest in dates. Russian psychologist Alexander Luria documented the famous case of mnemonist Solomon Shereshevsky, who was quite different from the first documented hyperthymestic known as AJ (real name Jill Price) in that Shereshevskii could memorize virtually unlimited amounts of information deliberately, while AJ could not – she could only remember autobiographical information (and events she had personally seen on the news or read about). In fact, she was not very good at memorizing anything at all, according to the study published in Neurocase. Hyperthymestic individuals appear to have poorer than average memory for arbitrary information. Another striking parallel drawn between the two cases was that Shereshevskii exemplified an interesting case of synesthesia and it has been suggested that superior autobiographical memory is intimately tied to time-space synaesthesia.

Hyperthymestic abilities can have a detrimental effect on cognitive capacity. The constant, irrepressible stream of memories has caused significant disruption to AJ's life. She described her recollection as "non-stop, uncontrollable and totally exhausting" and as "a burden". Like all hyperthymestics, AJ is prone to getting lost in remembering. This can make it difficult to attend to the present or future, as she is permanently living in the past.

AJ displays considerable difficulty in memorizing allocentric information. "Her autobiographical memory, while incredible, is also selective and even ordinary in some respects," – McGaugh. This was demonstrated by AJ's poor performance on standardised memory tests. At school, AJ was an average student, clearly unable to apply her exceptional memory to her studies. Similar patterns have been observed in other cases of hyperthymesia.

Deficits in executive functioning and anomalous lateralisation were also identified in AJ. These cognitive deficiencies are characteristic of frontostriatal disorders.