For several days Ken and Dang-Lu had continued their journey to the town that Ken had chosen to visit at random. Following their hair raising encounter with the man who was possibly murdered by a former Ranger the pair agreed to keep a low profile in their travels. Given that the man was targeted for some reason they did not want to also be next on the assassin's hit-list. Nights were spent with at least one of them up keeping watch while the days were spent traversing along the road but at a minimum distance of fifty meters.
The journey was traitorous but they nonetheless reached their destination; the city of Verona. It was a fairly lively community, and was one of only four such communities in Norland. Busy streets, thriving businesses, Ken and Dang-Lu felt like they had arrived back in a rebuilt Windshire. Wasting no time however, they headed for one of the Inns.
Once there, Ken activated his Arch Stone on a table-top in his room. He and Dang-Lu watched as the stone lit up and created the spectacular blue projection of Ken's elvan herald; Kima Shinno. Being the first time Ken was aware of who his herald was, he was taken by surprise at the sight of the young female elf.
"Hello there, Ken." Kima's astral projection greet, "My name is Kima Shinno, herald to Supreme Master Cruz and your liaison to the guild."
Kima's tone was very light hearted and more cheery in comparison to her sister Anthea's. Ken was especially taken off guard by this considering her calm and reserved mannerism when she sang the song at his graduation from the Academy.
"... Hello, Kima." Ken said after a brief pause.
"How can I be of service for you and Mr. Dang-Lu?" She asked.
"Well we are here in Verona and we had an encounter on the way here that suggests foul play is at foot in Norland."
"Oh? What sort of encounter?" Kima asked very curiously. "Did you see a new kind of monster? a demon?"
"We think it may have been a Rogue Ranger." Dang-Lu answered.
"A Rogue Ranger, you say?" Kima asked in astonishment. "That really is serious then. Did you get a good look at him?"
"No, we just know that he used a Kunai and wrist blades to murder a man who was trying to forcefully get us to take him to the guild." Dang-Lu explained. "He said he had something important to inform the guild of. We never found out what that was before the assassin killed him."
"The only thing we know about this Rogue was that he was very nimble and agile." Ken said. "He had to have been an experienced and well trained Ranger in order to bound through the trees as easily as he did."
"I see, well then if you will just give me a moment I will be right back with you." Kima said just before her astral form downsized into a small glowing orb.
"She's... quite unorthodox for a herald." Dang-Lu observed.
"I agree." Ken replied.
"You showed some sign of recognition when you saw her." Dang-Lu said.
Ken, careful not to divulge anything about his past, said, "She sang the Ranger's Parting at my graduation."
"Fascinating. It'd be interesting to see what kind of vocal talent she may possess."
"She was rather good." Ken replied.
Suddenly the orb began to change colors.
"This is peculiar." Dang-Lu said while the changing colors turned into flashes.
To both he and Ken's surprise the orb grew in size and dissipated back into Kima's form. This time however it was her physical form.
"What in the name of Aphrodite are you doing here!" Dang-Lu said in a panic. "Heralds are not permitted to leave the Guild. You're too valuable to venture into possible danger!"
"It's a room at an Inn, Scholar." Kima carelessly said. "I don't believe beds, chairs, & tables pose any threat to my safety. Besides I feel too enclosed at the Guild. I feel more like another trophy than an importance just staying there the whole time."
"She's fine Dang-Lu, she's safe here like she said & we have more pressing matters at hand." Ken said calming the situation. "I trust you have news for us?"
"Yes as a matter of fact I do." Kima said as she looked curiously around the room and out the window. "It seems as though there have been more than a few interesting similarities to your Rogue and an assailant that appeared a couple nights ago here in Verona."
"An assailant?" Ken asked.
"An assailant." Kima said. "Not much description has been given other than it's some figure cloaked in black that's been attacking people in the southern district. The victims have been left petrified and witnesses say the attacker can make extraordinary leaps."
"That does sound similar." Dang-Lu said. 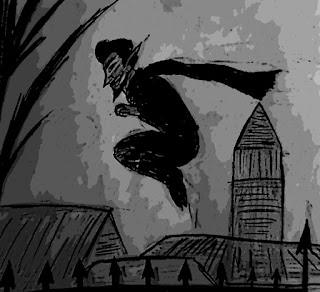 "Damn you!" Ken scolded.
Much to Ken's added humiliation, Jack stood on the other side of the fence taking time to mock his chaser. The mysterious assailant stood with his arms crossed, his cloak draped over him, and displaying a fiendish grin. His eyes suddenly seemed to glow in a fiery colorization.
"The orphan." Jack said with a very ominous voice.
"What did you just say!?" Ken asked with a furious voice.
"I think you ought to know," Jack continued, "That your sister is doing well."
Ken's shock and temper left him stunned beyond words.
Jack turned before leaving behind one last statement, "slavery, such a burden-free way to live."
The phantom then disappeared through the graveyard just as the constables had arrived on the scene.
"Where did he go?" the pale faced constable asked.
"He escaped." Ken simply said. "There was another victim though back this way."
Ken lead the two constables back to where the young lady, Tara had been attacked. Upon their arrival though, the robes which Tara was concealing her appearance with were all that they found. The confusion mounted as nobody had the slightest clue what to do next.
Dang-Lu suddenly appeared on the scene asking, "Is he here? Did you catch him?"
Ken looked around the area and let the circumstances answer his questions.

This post first appeared on Realm Of Monsters, please read the originial post: here
People also like
Blooms with a view: 10 of Britain’s best spring walks
How to Get Rid of Mice – 5 Methods
Can an Injured Pedestrian File a Claim Against the Negligent Driver?
Grouper (Lapu-lapu) Farming and Production Guide
The Trick to Always Looking Sexy for Your Guy
Remote Learning Resources for the First Weeks of School
تلميع السيراميك بأسهل الطرق
Happy Holi Images 2020 HD Wallpaper Greetings Wishes Whatsapp Pics
Top 10 Facial Mists & Sprays For Dry and/or Sensitive Skin