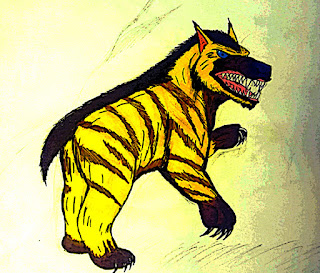 The man on the wrong looked confused but relieved; especially when the monster fully turned its attention towards the young Ranger instead. The beast approached Ken, menacingly and then began to circle him. Ken stood his ground with his shield on the guard and his sword at the ready to strike. The monster eventually stopped and the two began a brief stand-off.
Dang-Lu, though somewhat out of breath finally caught up to them in time to witness the two combatants in their brief pause. The elvan Scholar took refuge behind a tree fifteen meters behind them and gazed out to get a good look at the creature Ken was about to engage.
"A Shurakin." Dang-Lu said to himself as he quickly began taking notes.
Suddenly the monstrous canine dashed forth to attack Ken. He was able to hold the Shurakin at bay with his shield, holding it up against the monsters throat to keep it from being able to bite. Snapping and struggling wildly, the power of its jaws generated a loud chomping sound every time they closed shut as it tried to get at Ken. Though Ken defenses remained unbroken, the monster had backed him into a tree, preventing him from being able to strike with his sword. 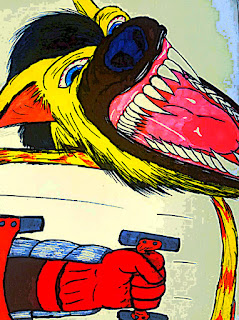 Eventually the beast pulled back from its assault. Ken tried to slash it with his sword while it retreated, but he missed. The two squared off once again, this time Ken was poised to put the engagement to and end; keeping a firm grip on his shield while raising his sword slightly like a scorpion's stinger.
The Skurakin suddenly charged once again but rather than become locked, Ken swept to the side and struck the monster with his shield. He could tell from the way his shield sounded as it struck the monster's head that it had an incredibly thick skull.
"My sword isn't strong enough to do any damage if I try to strike it head on." Ken thought to himself as the two once again paused. "But how can I get past those powerful jaws."
Suddenly Dang-Lu shouted, "Ken! Shurakins have powerful biting force but their muscles to open their mouth are weak!"
At that moment the Shurakin lunged at Ken again. This time Ken moved back to look for a way to latch the monster's jaws shut. The monster once again had him backed against a tree and Ken had to hold it off with his shield. In a quick decision and an equally quick motion, Ken duck to the side and sliced sword at the inside of its front leg. The weapon's blade sliced deep enough that it crippled the monster's limb.
The Shurakin fell forward and it was then that Ken saw his moment of opportunity. With all his might, Ken threw himself onto the creature's head and pressed it's jaws closed. Just like Dang-Lu said, the monster couldn't open its mouth and was pinned.
"You gave it a good fight," Ken said respectfully. "But this battle is over."
He then plunged his sword into the monster's chest cavity. Under his weight, Ken felt the monster flinch very strongly and then fall still.
"Alright Dang-Lu, come take your notes before I call for Ukuro." Ken said.
"Right," Dang-Lu said hurrying from his hiding spot. "This should not take long." 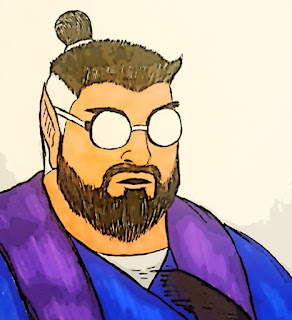 As the Elvan scholar began his examination of the Shurakin's body, Ken turned to assess the wellness of the person they had come to rescue. However, much to Ken's surprise the person had disappeared.
"Dang-Lu, where did that man go?" Ken asked.
"Right here!" The man said as he sprang up behind Dang-Lu and held a knife to his throat. "Don't make any moves or try anything funny!"
Ken whipped around and froze in accordance with the man's demands.
"Oh don't worry not a single move shall be made." Dang-Lu said quivering. "So what can we do for you today? Gold? Weapons? We have it all!"
"SILENCE!" The man shouted. "Who are you and what are you doing here?"
"My name is Ken Khan." Ken said. "I'm a Ranger and my companion there is a Scholar from the Guild."
"Still doesn't answer my question." The man said. "What are you doing here!?"
"We were examining a house nearby that this monster attacked. We heard your shouts for help and came to investigate."
"Yes we mean no harm." Dang-Lu said.
"Well I'm not sure if I'm lucky or you are unlucky then, but I'm afraid I'm going to have to force you to take me back to the guild with you." The man said.
"Why?" Ken asked.
"I'm afraid there's no time for that." The man said before pressing the blade into Dang-Lu's skin. "I wouldn't do something like this but I'm afraid the matter is very urgent."
For a brief moment Ken glanced at the knife at his companion's throat. All hopes at trying to get him free of the situation were too remote especially given that Ken was to far away from them to make any move.
"Listen, if you want us to take you back to the Guild we shall do so but there is no need to put my friend there in harm's way." Ken said to the man.
"I would love to, rather I want to believe you." The man replied. "But given the kind of people I have encountered I'm afraid I will have to stick with these circumstances. Now we've wasted too much time talking. Take me to the Guild or I will be forced to harm your friend."
Though it felt cowardly to give in, Ken had no choice but to bend to the man's demands. He nodded compliantly.
"Good." The man said. "Now let's get started-"
Suddenly the man was struck in the back with something that instantly paralyzed him. The knife fell out of his hand, much to Dang-Lu's relief who quickly pulled away from him.
For a moment the man stood frozen both in pain and fear. Then he was suddenly yanked up back and up into one of the trees. Ken and Dang-Lu raced forward to see what happened. From the way the light was hitting the trees they could not make out clearly what was happening; only that the man was not alone up there.
He was then thrown down to the ground, dead. There were two huge and bloody gashes left in his chest by a bladed weapon of some kind. Ken and Dang-Lu looked back up towards the trees to see who the assassin was. All they saw was the fleeting image of another man in a long overcoat dashing from limb to limb out of the area.
There was no point in pursuing at the speed he was moving. Dang-Lu took a moment to look over the man's body and upon further investigation he found that there was another wound on the back; where the kidneys are located.
"He was struck with a kunai." Dang-Lu said. "And it looks like he was killed by a pair of wrist blades."
"A kunai and wrist blades?" Ken asked. "Those are the sort of weapons a ranger would have though, right?"
"Yes." Dang-Lu replied.
Ken looked back up where they saw the assassin make his exit, "And that would account for his ability to move so swiftly through the trees but, I never heard of a Ranger killing a man in this fashion."
"You know, I have heard stories of several factions of Rangers who went rogue." Dang-Lu said to Ken's surprise. "They say that for whatever reason Rangers have in the past given up there mantle's in pursuit of personal gain. I thought that when a Ranger broke their oaths that they were imprisoned or worse, though."
"So did I." Ken said.
The two stood looking both puzzled and at the same time nervous at the prospect that there was such a threat in their mists.