News Post: The Creator Returns, Next Saga, and more!

After a long trip through Germany, Scott Newman the creator of Realm Of Monsters has returned! With his return, Scott has already gotten started on getting things rolling again for RoM. He has begun writing new episodes and working on new ideas to get this awesome series back on track for you the readers!

-The character page is becoming the center of attention as far as the updates go. Scott is working diligently to get that page up for you all to get a nice little in-depth look at the heroes villains and more.

-More monsters will be soon added to the Monster Archives

-More artwork coming to the Artist Corner from Scott, Rebecca Kai, and April

-Soon RoM will also be getting a new domain name! More will come on that as it develops!

One of RoM's most beloved team-mates, Morgan Kauffman, has begun a thrilling series of her own called Mannequin Mask! Forewarning it's not advised for the younger audience due to gore. Nevertheless it is a thrilling and beautifully crafted Sci-fi/horror series that is sure to engage any lover of the genre! The series about a girl who seeks revenge on those who bully her for disfigurements that she suffered after a horrible accident. The first chapter and even a teaser trailer is already available for your enjoyment as well!

Scott is also at work on a side project of his own! For the past year he has been working hard on a horror novel which will be released through Amazon known as BRAY ROAD! For anyone who loves a good straight forward monster story, especially ones involving Werewolves, then this will certainly be a story for you. Inspired by the Wisconsin werewolf legend, the Beast of Bray Road, the story will be released on June 30, 2017 and will be available for pre-order soon. The official synopsis is as follows:

Ben Thomas recently lost his job as a detective in New York City. While returning to his hometown of Elkhorn, Wisconsin, he nearly has an accident when a strange animal runs across the road in front of him. The encounter reignites the flame to a local legend of a monster that supposedly resides in the nearby woods; a legend that many locals shun whenever it is spoken of. When a half-eaten body is discovered near the same road, Ben soon finds himself caught between the angry prejudice and the hungry eyes of the Beast. 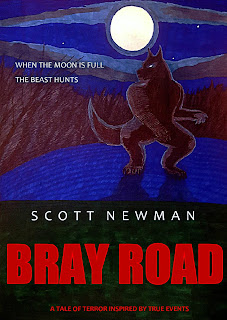 If any of our readers are Godzilla fans like RoM's creator, be sure to keep an eye out for him at G-Fest this year out in Chicago. Scott won't be attending as an honored guest but as a fellow G-Fan for the third year in a row. If you happen to see him roaming around between the various panels, activities, and especially the dealers room, feel free to say Hi! Scott is very approachable and he'll be more than willing to answer questions about RoM and his love for Godzilla. He also loves competition when playing in the game room, namely on the pinball game!

G-Fest will be held at the Chicago O'Hare Crown Plaza from July 14th to July 16th and Scott will be there all three days!

So with all said and done, it's time to get to what many of you have been looking forward to and that's a preview for the next Saga in RoM. While there isn't an official preview as there normally is with the episode previews there are several points that the creator has released to satisfy everyone's curiosity on what's going to happen next!
With yet another tragic loss dealt at the end of the last Saga, we'll see Ken, now a full fledged Ranger, in a much more edgy state of mind. Though it will make the tone darker for our hero there will be a new character introduced who will serve the same purpose for the series as he is secretly doing for Ken; keeping things from getting too grim. Almost every surviving character will make a return, save for one for obvious reasons but all the favorites will be back like, Liam Hanzo and Vanessa Chen. Of course the warlock Hades will still be working on his master plan but we'll also get introduced to some new villains in the form of a clan of "Rogue Rangers," that call themselves the Kaijin. Aside from the Kaijin there will also be an array of new monsters that Ken and his companions will encounter.

There we have it, the next Saga looks promising for the series' return which will be on July 3rd!

That just about wraps up this News update, be sure to drop back by to check out new updates on Realm Of Monsters and don't forget to do a recap on past episodes if you haven't had the chance to already!


This post first appeared on Realm Of Monsters, please read the originial post: here
People also like
Meow Bar, Moscow
Have transaction data from all your sources joined in one place
Cabbage Production Guide
Hindu Reincarnation Memory Club (HRMC)
Bed Bug Size
“The Friend Who May Not Seem a Friend”: The Cat and the Fire, Part 1 of 3
Which Apple Watch should you buy in 2021?
A virtual tour of Peru through films, food, books and music

News Post: The Creator Returns, Next Saga, and more!