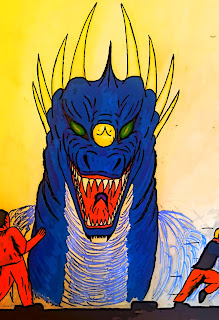 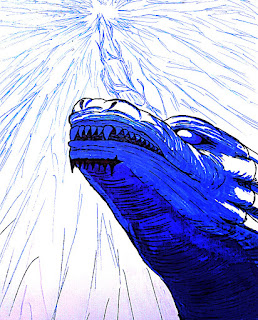 Once again flustered, Leviathan searched the area with a malevolent demeanor. While charging up another dose of its electric shocks, Ken and Argo vacated the immediate area where it couldn't reach them. In another destructive burst, the monster let out its devastating attack, setting fire to every building and ruin along the boardwalk.
Ken and Argo, out of sight and further out were completely unharmed from the strike.
"That was good luring it out here Argo." Ken said as he took a moment to catch his breath.
Argo too took a moment to catch his breath before thanking Ken. He fell back hard against the wooden wall of the building they took refuge in.
"We have to find a way to destroy that beast." Argo said.
"Its gills seem to be a good weak point." Ken said. "Perhaps we could find a way to kill it that way?"
"What do you suggest?" Argo asked. "We find a way to destroy the gills and drown it?"
"That's the best I can think of right now." Ken answered before peering back out the door to find that the monster had disappeared. "Great wear could it have gone now?"
"That hot spear did hurt it though." Argo said as he sat himself up from the wall. "Maybe we could try-"
In an instant that seemed to last minutes, something suddenly erupted through the wall behind Argo; the tip of Leviathan's horn. Ken watched helplessly as the beast's horn not only broke through the wall but impaled his friend as well; throwing him forward slightly. Piercing his back Argo was paralyzed as he looked down at the tip of its horn sticking out of his midsection. Blood began to run down his mouth and even more so from the fatal wound.
Ken after overcoming a brief moment of fear tried to run to Argo's aid, which turned and helplessly reached out to his friend. Ken's fingertips barely touched Argo's. Leviathan pulled him through the wall and arched its head up into the air. Still impaled on the monster's horn and barely alive Argo was treated to one last image of the Ocean.
"And so it ends, at the beginning." Argo said with his last few breaths.
From the gash in the building Ken watched in horror as the monster suddenly whipped its head upward and flung Argo into the air.
ARGO!!!
The son of a nobleman fell back down right into the jaws of Leviathan.
Time froze at that moment for Ken. In a flash he recalled the past seven years with the friend who nearly became his enemy; the moments of growth, the moments they helped one another, the challenges they faced, the laughs they shared. In one instant it was over. Ken remembered how Liam said that his friends were now family and Argo had truly grown to become like a brother to the orphaned warrior.
His moment of reflection and grief was cut short when Leviathan suddenly looked down and saw Ken standing in the building's gash. The shock of his friend's death had rendered Ken petrified before the Titan. It reeled its jowls back in a sinister manner, recognizing the one who slashed its eye a short while prior.
Leviathan suddenly lunged down and attempted to devour Ken as well when suddenly a figure dropped down in front of him. The new combatant ignited a white force field which the monster mistakenly bit down on; shattering its sharp fangs. Ken threw up his hands to shield his eyes from the bright light. When the force field faded, he saw that the one who intervened was Overseer Corvin Risho.
Leviathan reeled back in pain with its teeth shattered and bloodied. Ken fell back on his rear in stunned silence at the spectacle he had just witnessed.
"I'm sorry I did not arrive sooner, Khan." Risho said. "Stay well back now."
"Overseer..." Ken said still in shock. "Your power..."
"Yes I know." Risho said. "I have broken my race's most coveted law by unleashing it. But Ken, stay focused, get back!"
Ken came to his senses and ducked back into the building just as the monster attempted to unleash its electric burst. Risho once again ignited his force field just as the bolts truck across the area. Once again the white shield protected the Overseer.
Once the bolts of electricity subsided, so did Risho's force field. He stood with his hands in a prayer like state just as multiple balls of fire seemed to form out of thin air around him. 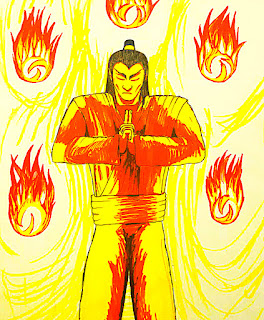 They then converged into one and suddenly began spewing out flame at Leviathan. The monster's skin seemed to ignite instantly. It began writhing in agony as Risho continued to pour flames over it with his magic.
Once the front half of Leviathan's body was a raging inferno, Risho ceased his attack. Unable to bear the flames, Leviathan suddenly made a desperate charge back through the ruins into the sea. Ken and the Overseer watched as its long and mangled dorsal fin slithered away and eventually vanished into the depths.
Ken was left in complete awe at what had just transpired. He wanted to ask so many questions, namely why he did not intervene sooner, but he couldn't mutter a single word.
"It's not over Ken." Risho said as he peered up towards the rooftop across the way. "We have a greater enemy in our midst."
Ken stood up and looked across the way to see a dark figure standing on the roof; Hades. Ken instantly recognized the warlock for it was a face that was forever burned in his memories and his nightmares. In a furious manner he charged forth to challenge the evil sorcerer but was thrown back by invisible force of some kind from Risho.
"No." Risho said. "I know that you seek justice for your family, Ken but this enemy is beyond you. I must be the one to face him."
Risho stepped out into the clearing of the ruins which Leviathan had in its wake. Hades looked on both angered and then suddenly amused. He did not have to hear the words to know that the Elvan Overseer was challenging him to a duel. The warlock leaped down from the building's roof and landed with grace and menace of a vampire bat.
"Most impressive, Elf." Hades said. "I had heard the stories of the magical abilities that your race possessed but to drive off the titan, Leviathan is a most impressive feat."
"So you did do it." Risho said. "You found a way to revive the titans of darkness."
"Indeed so." Hades replied. "Took many years, required the life force of no less than ten virgins, and of course the sorcerer's eye but I figured out how to do what so many others could not."
"You should not have done so." Risho said. "Even with all that you possess, the Titans of Darkness collectively are too strong even for a warlock or any being to control."
"If you wish to talk about things we should not do, Elf, then let's discuss what you just did." Hades countered. "As I understand it your race has vowed to never enact violence or engage in combat on the human's behalf. Yet here you stand about to break that law for a second time."
"I'm already condemned to be tried by my elders." Risho said. "So should my judgement not end well then at least I'll have stopped you, Warlock."
"Stopped?" Hades mocked. "I don't think so elf, but you are welcome to try."
Suddenly Hades furiously threw his hands forward and unleashed a burst of electricity similar to Leviathans at Risho. Once again Risho defended with a force field. Realizing his attack had no effect, Hades resorted to conjuring several balls of fire and hurtling them at Risho. Instead of blocking them, the Overseer deflected them with his bare hands. One of the fireballs he deflected back at Hades who stopped it in mid-air. With a few motions of his hands the Warlock caused the fireball to split into three but then they suddenly transformed into green spectral heads. The evil spirits began zipping every which way at Risho who was forced to dodge them. 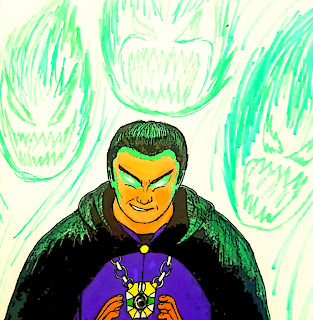 Music Profile: Elliott Waits For No O…
Allianz Grants Free Health Insurance …
A Boss vs a Leader; What’s the Differ…
Holiday Cards – A Brief History
Where To Find Free Images For Your Bl…