Lady Gaga Brings the Fireworks at Coachella Weekend 2, Confirms ‘A Star Is Born’ Filmed at Festival 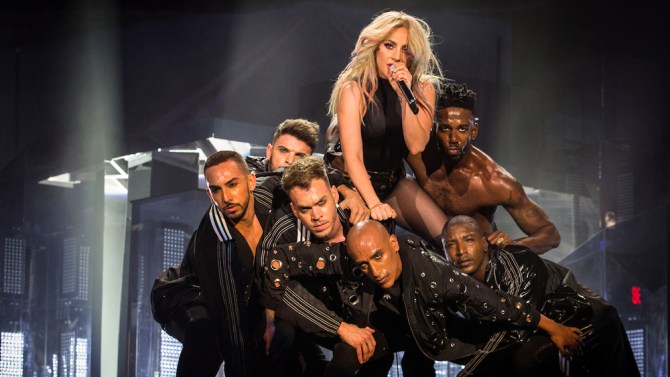 Lady Gaga chose the second weekend of the Coachella Valley Music and Arts Festival to announce the launch of her upcoming film “A Star Is Born.”
The pop star closed out her headlining set on Saturday night by thanking co-star and director Bradley Cooper, in addition to confirming that their movie remake had recently filmed scenes on the Coachella grounds. Warner Bros. revealed that production had started on Monday and released the first image from the drama, which shows Gaga’s character Ally singing on stage while Cooper’s character Jackson, a fading country music star, looks pensive, with a guitar in hand.

Fans were notified last week of an opportunity to appear in a scene being filmed on Tuesday and Wednesday at the festival’s grounds. Attendees were asked to dress in denim and boots (“leave those pink ‘Joanne’ hats at home,” the announcement read) for the scene set during a country western music concert.

Gaga dazzled on the main stage, playing both her dance megahits and country-tinged new singles from her latest album, “Joanne” — a repeat of the first weekend’s set. Clad in an all-leather military-inspired uniform, and sporting cotton candy pink and blue steaks in her blonde hair, Gaga opened her set about 25 minutes late at 11:30 p.m. with a surprising choice, “Scheiße” from 2011’s “Born This Way” album. After stripping down for a quick outfit change, she followed with the more popular “LoveGame” from her debut album, “The Fame.”
Gaga then revealed that her parents were in attendance, and that she was nervous about the performance. “No matter how many times I see your beautiful faces, it still makes me shake like no other,” she said, sharing the first of several anecdotes.
Although the majority of the crowd was unfamiliar with “John Wayne,” they went wild for her “Just Dance” remix. “Alejandro” and “The Edge of Glory” also elicited strong reactions from the audience as festival-goers were brought to tears by her acoustic rendition of the latter. The singer dedicated the performance to her friend Sonja, who’s battling cancer. Gaga — born to take the Coachella stage — seamlessly alternated between playing instruments — the piano, guitar, and keyboard guitar — and showing off intricate dance moves.
The Grammy winner changed into a hot pink sweatshirt to perform “The Cure,” which she debuted last week at Coachella, as gold and pink fireworks went off beside the massive outdoor stage.
Thousands of people also went wild for two other classics, “Poker Face” and “Telephone” — which features Beyonce, who was originally set to to headline the festival before pulling out as a result of her pregnancy. Fittingly, Beyonce had initially been courted to topline “A Star Is Born” opposite Cooper when Clint Eastwood was first attached to direct.
Fireworks and flames lit up the sky again when the singer closed with “Bad Romance.” “I write songs about things that are really bad for me, for example, bad romances,” she introduced the hit. She also discussed her New York roots and hatred of bullies. In addition to Cooper, she thanked her parents, dancers, band, and record producer Jimmy Iovine as well before taking a final bow.

Lady Gaga Brings the Fireworks at Coachella Weekend 2, Confirms ‘A Star Is Born’ Filmed at Festival