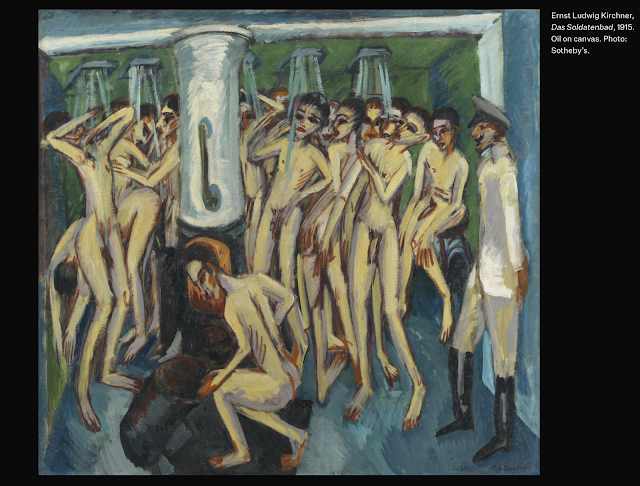 Das Soldatenbad by Kirchner is one of the many paintings Jewish art dealer Alfred Flechtheim lost due to Nazi persecution which targeted him and forced the Aryanization of his art gallery in 1933.
For more see Nordic News Weekly
and the press release by the SMK museum
which states :

Fzmovies 2020: Download Bollywood, Hi…
Give the gift of health and fitness t…
5 Things You Should Do While You’re I…
101 ideal activities for my new life …
Shah Abbas Rug Design
The painting was unlawfully sold to Kurt Feldhäusser, a member of the Nazi party.
Upon Feldhäusser’s death in 1945, ownership of his collection passed to his mother, who brought the work to the United States. Via donation, it arrived first at The Museum of Modern Art and then The Solomon R. Guggenheim Museum in New York. Following extensive studies of its provenance, the picture was restituted to the Flechtheim heirs in 2018. In the autumn of 2018 the painting came up for auction, where it was sold to the Norwegian fund Sparebankstiftelsen DNB.
- Expressionist masterpiece with dramatic history at SMK
29 March 2019

5 Things You Should Do While You’re In San Diego