Mzbel finally reveals why ICGC kicked her out of church 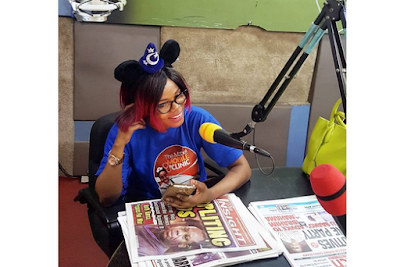 It is no more news that Mzbel does not believe in Jesus Christ anymore so the big question has always been what led to that. The singer has finally detailed why she is no more a Christian. Not just that, she also talked about what made her comment on Pastor Josh Laryea’s suspension at church. From her talks, Zionfelix.net deduced that both cases have the same cause.

The singer who was on Peace FM Thursday afternoon to promote her May Day free healthcare to over 2000 Ghanaians made it clear that she did not have any affair with Pastor Josh Laryea as people are speculating. She revealed that International Central Gospel Church (ICGC) booted her out of the church because of a conversation she had with Awo Zutah, wife of gospel musician Eugene Zutah.

Mzbel told Kwasi Aboagye, host of the show that Mrs Zutah made a shocking revelation about Pastor Josh Laryea to her and she also communicated the message to Eugene Zutah for them to investigate the matter.

The musician who recently released ‘Slowly’ single continued that the husband and wife later ganged up against her, Mzbel insinuating that she wants to disintegrate the church and also collapse their marriage but that was far from the truth.

ALSO READ: Afia Schwarzenegger reveals how ICGC made MzBel not to believe in Jesus Christ again

“Awo Zutah told me something about how she feels about Pastor Josh Laryea and what she said was not pleasing to the ear. She is a married woman. I didn’t like it so I reported it to her husband. The next minute they ganged up against me and kicked me out of the church.” Mzbel revealed.

She continued that Awo Zutah is the cause of Josh Laryea’s trouble he is facing at the moment.

“So eventually I was kicked out of the church because the thought I wanted to collapse the church” Mzbel added.

Mr. and Mrs. Zutah are yet to react to the allegation levelled against them by the female musician.

Mzbel hosts the second edition of her annual “The Mzbel Mobile Clinic” on May Day at Bukom Square in Accra. The singer says she hopes to give free healthcare to over 2000 Ghanaians on the day.

Mzbel finally reveals why ICGC kicked her out of church