The Federal Government has said no Nigerian died during the recent xenophobic attacks in South Africa.

This was revealed after a meeting between the Minister of State Foreign Affairs, Khadija Abba-Ibrahim, in Abuja and the High Commissioner of South Africa to Nigeria, Lulu Aaron-Mnguni, on the issue. 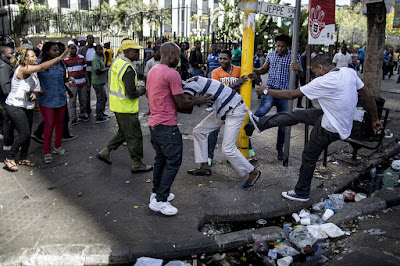 Nigerian buildings, properties and places of worship worth millions of dollars were destroyed by South Africans on February 5 and 18. After which the Ministry on Monday, February 20, summoned

the South Africa High Commissioner over the matter.

The minister said no Nigerian lost their lives in the attacks contrary to reports in some media.
According to her, the reports that mentioned the killing of Nigerians in the xenophobic attacks are unsubstantiated.

“The ministry has not received the report of any death of Nigerian in the latest incidents of attacks against foreigners.
“The Nigerian High Commission in Pretoria is in constant touch with the Nigerian Union in South Africa, the Department of International Relations and Cooperation (DIRCO) of South Africa, as well as the South African police.
“All these agencies have confirmed that no Nigerian life was lost in the recent incident,” she said.

The minister said the government was in touch with South African authorities to ensure the safety of Nigerians there. She therefore appealed to the media not to fuel the crisis further with unconfirmed reports.

Responding, the South Africa High Commissioner to Nigeria said his government was on top of the situation.

Mr. Aaron-Mnguni said the Minister of Foreign Affairs of South African will hold a briefing with the diplomatic community in his country on Friday to fashion out more ways to solve the problem.