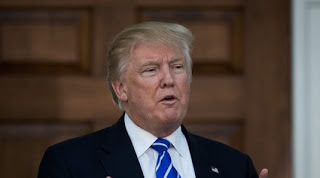 President-elect of the United States of America, Donald Trump has once again uttered shocking sentiments towards some of the African Presidents whom he once gave a warning that he would severely ‘deal’ with them during his campaign, iMzansi reports.

During a long speech on Monday afternoon, Mr Trump had no kind words for the Nigerian President, Muhammadu Buhari, whom he lashed out for ‘taking no action’ after 200 Chibok girls were abducted by the notorious force Boko Haram.

”If one of his daughters, let me say two or three were among those who were abducted could he just fold his arms just like that as if all things were ok? That alone shows how evil he is, probably he is secretly behind the Boko Haram, believe me I was hurt, touch not the girl child, no to abuse, he will ‘pay’ for that as well in January”, said Donald Trump.
“I want to reiterate here before America’s greatest heroes that I will not condone any dictatorial tendencies exhibited by dictators around the world especially the two old men from Zimbabwe and Uganda. In January when I ascend to Presidency, you will actually know my true colors”.
‘Mugabe and Museveni must be put on notice that their days are numbered and that I am going to arrest them and lock them in prison. If the past American administrations have failed to stop these two despots, I will personally do it,” Trump was quoted.


According to the news website, Donald Trump in June last year, also promised that he would off the President of South Africa when he ascends to Presidency. The US president-elect publicly accused President Jacob Zuma of ‘flirting’ and ‘proposing’ love to his wife Melania, after he discovered emails that were sent by Mr Jacob Zuma’s official government email, of which Mr Zuma rubbished the allegations saying he was ‘a man of people’ and a ‘friend’ to everyone.

According to an American political analyst, Mr Michael Reid, Donald Trump is more likely to fulfill his promises since he is a man of his word