'Blue Satyr' - 2nd Male Nude From Series of Figurative Sculpture by 'Art of Kuriology'
Exhibited at Helston Museum, Cornwall, June 2017
'Blue Satyr' -  2nd in a mini-slideshow series of Male Figurative Sculptures created by Kuriology.   Sculpture as exhibited at Helston Museum, June 2017 as part of the 'From Behind Closed Doors', a sculpture exhibition by The Kuriologist. 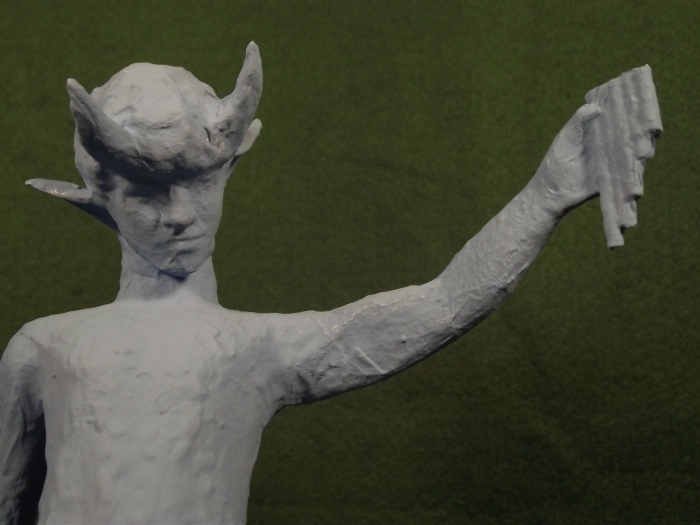 Which makes me laugh, as for many years the Cornwall Gay Pride parade at Truro would pass by a very large naked male sculpture of a nude drummer in Lemon Quay Plaza, presumable erected by the council.

Nudity is after all not pornography...or is it?

Some however seem intellectually incapable of differentiating between the two.

This is the definition of pornography - 'printed or visual material containing the explicit description or display of sexual organs or activity, intended to stimulate sexual excitement.'

The problem here is personal intent & interpretation.  I know someone who has a real thing for women's stiletto shoes.  A picture of an unworn stiletto shoe can cause them sexual arousal, but an image of a shoe is certainly not pornography by definition.

I have always considered in any nude artwork, be it painting or sculpture as to whether the subject is depicted in a natural state & one which does not convey or intend to convey overt sexual eroticism.

Likewise I have always liked the attributed quote to Henri de Toulouse-Lautrec, but be damned if I can find it.  It went something like, - a wealthy Lady observing Lautrec's paintings at exhibition criticized Latutrec's paintings of nude women as being obscene, prostitutes being his models.

Lautrec said to have responded along the lines of - 'Madam, please take your filthy thoughts off of my nice clean paintings'

Generally I find those who criticize depiction of nudity in art are generally trawling & reflecting the bottom of their own lurid thoughts & sexual depravities, fantasies & fetishes far more so than that of any intent on the part of the artist to depict or convey such.