Energy Performance Oversight and a Gas Guzzler Tax for Homes?

I know I owe everyone a redesign of our Performance Sticker and some talk of the various available home Energy use metrics, but that is tall order, and I have been a bit short on time. So, instead I’m going to buy a little more time with a discussion of one of the lesser points that arose in the Sticker post comments . . . how involved does government get in the process of making performance stickers a requirement of the building industry?

Comparative energy use performance information has long been a staple of the auto industry. EPA estimates, for better or worse, have given us a means of comparing the fuel use of cars. They also give those of us obsessed with energy efficiency an open invitation to a dark pit of depression when watching car commercials. Seriously, they’re bragging about 24mpg? Pass me a pint of ice cream, a bottle of rye and my blanky . . . isn’t that how everyone deals with depression?

This testing is, as I understand it, carried out by the car manufacturers and reported to the EPA. The EPA then audits 15% or so of them to keep the manufacturers relatively honest. These tests are only performed on new cars and certain large models are exempt. For instance, GM is not required to Provide Hummer data to the EPA. Presumably the 10mpg results would just be too embarrassing for everyone.

Car manufacturers test only a single representative of a given model for mileage as each is expected to be nearly identical. While the results are not always particularly accurate when compared with real life performance, they do provide a fairly reasonable means of comparing different models. For instance, I may not know what the exact, real-life mileage of my Accord will be, but I can be fairly certain it is going to be  15 to 20 mpg better than what I would get from that Dodge Ram.

All of this originated with a “Gas Guzzler” tax intended to encourage the production and purchase of more efficient private automobiles. Larger vehicles like trucks and vans were left out because they were seldom owned for private use. The law assumed if you had a truck or van, you had a legitimate use for it. How surprised those lawmakers would be today when a 6,000 lb truck is considered a perfectly reasonable vehicle for running your 80lb child to soccer practice.

Legally we can't call this a "Gas Guzzler"

So, how might this system apply to homes? Basically, we have a government mandated test for new products tied to a tax. Could that work in the housing market? With what changes? Believe it or not, I have an opinion.

Let’s start with the idea of a tax. We have an established habit of taxing things that have a negative effect on individuals and/or those around them. We tax liquor, tobacco, gas guzzlers, etc. We also tend to be more comfortable with taxes on non-necessities. At a NY grocery store there isn’t a tax on milk, but you’ll be paying one for the cookies to go with it. I think we can agree that low-performance homes fall in one if not both of these categories. So, a tax would not be outside  our historical inclination.

Let’s say we impose a graduated tax based on the projected energy use of new buildings. This tax would be levied either on new construction builders or buyers. I would argue builders as the buyers are going to be paying it either way. Leaving the exact metric out of this for the moment, let’s imagine that we base this tax on the results of some basic standard test and analysis. Results of this test must be sent to the appropriate agency. The agency would then levy the tax and provide an official document to be used in the sale or resale of the home in question.

There are, of course, some challenges. In this plan, each individual home would need to be analyzed. Solar orientation is the biggest reason for this individual attention, though variation in construction quality can certainly not be discounted. This could be conceived as an unreasonable burden on the builder. However, one could also argue that builders have been unreasonably unburdened in this respect for too long. Home performance, unlike performance in nearly every other consumer product, has remained relatively unchanged for a long, long time. This burden could also be reduced by providing a baseline rating based on code requirements. Homes would receive this rating without the necessity for more elaborate testing and be taxed accordingly. Builders would still be required to share the rating with potential buyers.

Another challenge could be Oversight. If left to their own devices there is little doubt that some builders would be less than honest in reporting certain specifications. Insulation values, for instance, are an excellent opportunity for subterfuge. The oversight agency would have trouble auditing any of the reported homes for  those things, like insulation, which are difficult to inspect once a home is complete. This could be solved by third party inspection and oversight, but again we start to see the system become cumbersome. 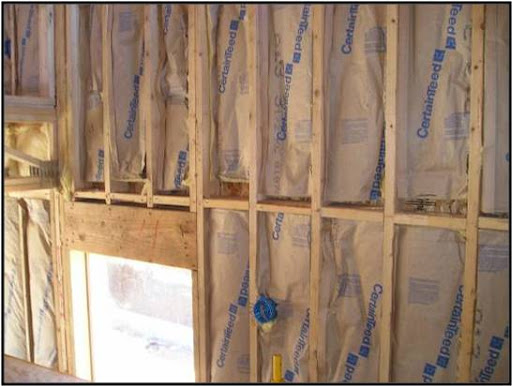 A little drywall and this looks perfectly fine.

Lastly, energy use in a home is difficult to predict as so much relies on the habits of the homeowner. Any predicted usage is likely to be way off. However, this is a similar problem in our car example and rather than dissuade universal enforced use of some sort of metric, this unpredictability of behavior encourages it. The more universal the adoption of a metric like this, the more useful it is. This is because such metrics only provide truly useful information in comparison. Sure, the family that leaves the heat set to 85 and doesn’t believe in an off switch is going to use far more energy than the amount on their home’s  performance sticker. However, they can be reasonably sure that they would be using even more energy if they had bought the home with the lower performance rating.

So, to make a long post short, I propose a required analysis provided by a third party for all new homes. This would likely include a blower door test and a detailed analysis of all specs (orientation, insulation, mechanicals, etc.) including an inspection. In a perfect world, this test could be part of the municipal permitting process with the tax revenue from inefficient homes providing the necessary funding. The result would be an easy to understand comparative metric that would inform buyers and determine the gas guzzler style tax on the property. Of course, there is nothing perfect about this world, and my idea is, without a doubt, too simple to work.

To answer a valid concern in the comments of the original performance sticker post, I don’t think a program like this should be mandatory for Older Homes, but it doesn’t seem unreasonable to expect some required energy oversight for new or fully rehabbed houses. Older homes could choose to use the system as it becomes something buyers expect to see, but as was mentioned in the comments, there is certainly no need to waste money  to tell me a 100 year old Philly row home is inefficient. I expect it’s use in older homes to become a voluntary but eventually expected practice.

Well, I appear to have used this blog post to demonstrate something of the nature of inefficiency. My apologies. It is as Mark Twain once said, “I didn’t have time to write a short letter, so I wrote a long one instead.”

If you made it through, tell me what you think. Should we mandate the use of a particular metric to value the energy performance of new homes? Does an accompanying tax for poorly performing homes make sense? What other strategies are there for insuring consistent use of a single standard?

Use the comments to provide your own insights or to chastise me for my long, lazy and confusing writing.

If you enjoyed reading this post I can promise you'll love our new writing over at Postgreen Homes. Yeah, we know that's the same thing your favorite band said and their new album is nowhere near as good as their early stuff, but seriously, we are actually still getting better.

There also isn't much conversation to be had here . . . at least not with us. So come on over to the Postgreen Homes Blog and tell us what you think of our new(ish) digs and crazy ideas. We will be sure to tell you what we think of your opinion.

Energy Performance Oversight and a Gas Guzzler Tax for Homes?