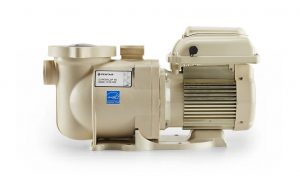 We have always recommended “oversizing” variable speed pumps so you can get the advantages of low noise and cool running temperatures. The 1.5 HP max Superflo VS is a good choice in our opinion to replace 3/4 HP and 1 HP pumps for pools that have low resistance to flow (low total dynamic head). This will allow the pump to run at a low speed most of the time. We do not recommend installing this pump to replace existing 1.5 HP single speed pumps if you have solar pool heating panels.

The automation improvements are mainly applicable to people with Pentair PSL4, EasyTouch, and Intellitouch control systems or Jandy (Zodiac) Aqualink systems. The new RS-485 control setup will allow a Superflo VS to operate like the flagship Intelliflo VS pump with complete control from the automation system via digital controls with 2 wires. The analog option will still exist, allowing the pump to operate with basic solar controllers like the Pentair SolarTouch and Hayward/Goldline GL-235.

The pump still operates on 115 or 230 volts. While 115V pumps are not prevalent in Southwest Florida, it could replace some older pumps that operate on this voltage without costly electric upgrades.

We are pleased to see that Pentair is improving the Superflo VS pump to make it more suitable for use with solar pool heaters. It will not be applicable to all pools, but it adds a lower cost option where it can meet the demands of some pool owners.

This post first appeared on Solar Pool Heating Panels | Solar Electricity, please read the originial post: here
People also like
10 of Britain’s best family-friendly hotels – for you and the kids
Fathers Day Gift Ideas
Important Technology Solutions That Will Help Your Business Succeed
A Furry’s Guide to Cryptocurrency
Brighton to get new outdoor swimming pool as part of seafront regeneration
How to Get Rid of Mice – 5 Methods
How to Exchange ETH to BTC Without Going Crazy Over It
Music Profile: Elliott Waits For No One - Alternative Rock Band - Illinois, Usa | SRL Networks London Music PR