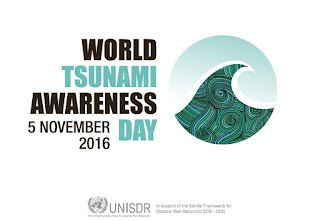 Cat Coronavirus Diary – Day 18
How to Keep on Running During the Pan…
Older adults (60plus) lockdown home w…
Empire of Language- Prelude-Metaphors…
Romantic Interior Design
In December 2015, the UN General Assembly designated 5 November as World Tsunami Awareness Day. The Assembly called on all countries, international bodies and civil society to observe the day, in order to raise tsunami awareness and share innovative approaches to risk reduction.
The date for the annual celebration was chosen in honour of the Japanese story of “Inamura-no-hi”, meaning the “burning of the rice sheaves”. "Inamura no Hi" is a story of a man who noticed a precursor of a large tsunami at the earliest stage and led village inhabitants to a high ground by burning harvested rice sheaves in 1854.
About World Tsunami Awareness Day (The United Nations Office for Disaster Risk Reduction)
Tsunamis are rare. But they can be extremely deadly. In the past 100 years, more than 260,000 people have perished in 58 separate tsunamis. At an average of 4,600 deaths per disaster, the toll has surpassed any other natural hazard. Such a stark impact isn't inevitable, however. Early warning systems can save lives. Equally important is community and individual understanding about how and where to evacuate before a wave strikes. Tsunamis know no borders, making international cooperation key for deeper political and public understanding of risk reduction measures. As a result, the UN General Assembly has made 5 November into World Tsunami Awareness Day, with the first edition being held this year.